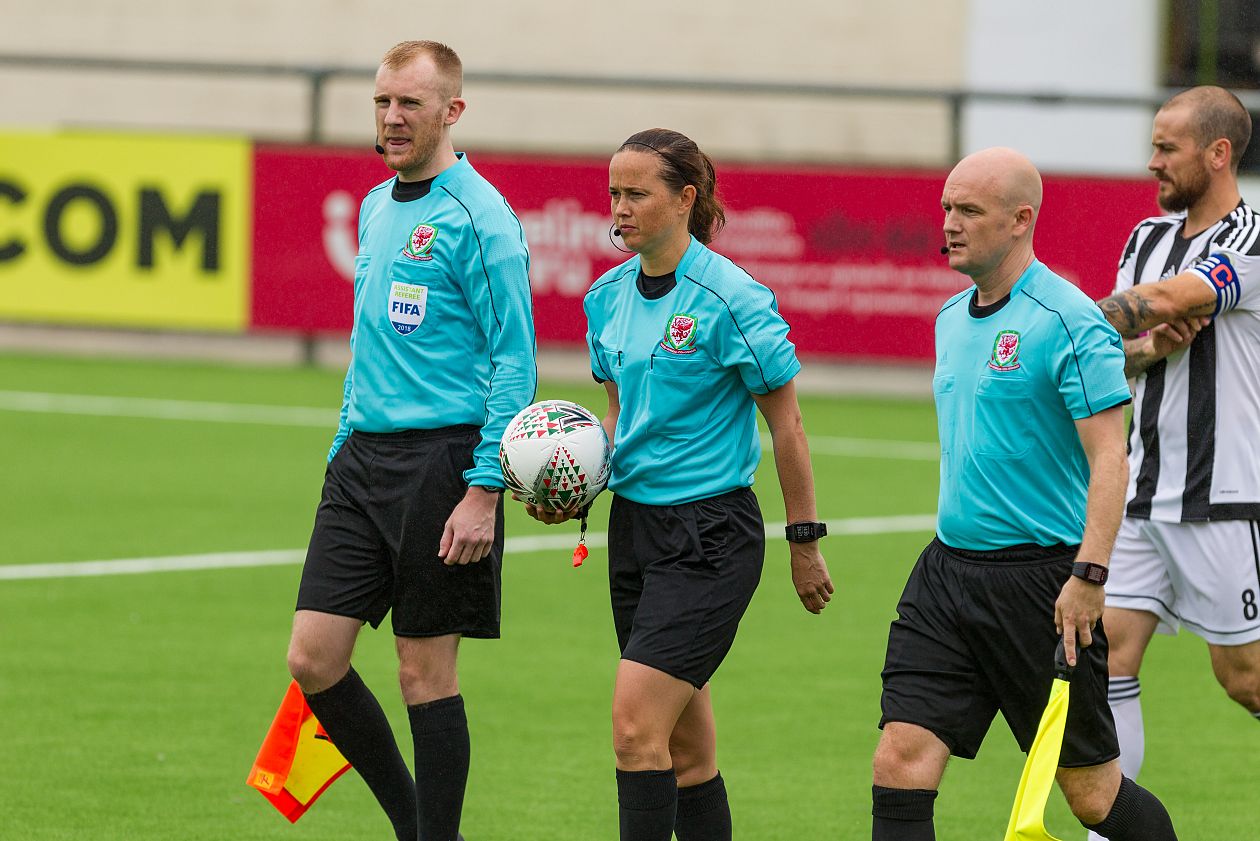 The South Wales Football Association has decided to follow the practice of the North East Wales FA and several English Counties in introducing yellow armbands for referees who are under the age of 18. The aim is to make players, coaches and spectators aware that the referee themselves is still a minor. The scheme has the support of the FAW Referees’ Committee

The armbands are designed to identify younger referees and ensure that they are supported. We hope that the armbands will remind everyone involved in grassroots football that the referee is a young person who is still developing as a referee and to refrain from making comments which may leave a young referee feeling intimidated, threatened or in some cases abused.

We will be providing every U18 Referee with a yellow armband which must be worn at all times when officiating in games under the Association or local league jurisdiction.

The aim of the armbands is to make people think before they speak. Referees have a challenging but rewarding job and it important that we support all referees especially those under the age of 18.

We have had a number of cases where young referees have been subject to insulting, offensive and abusive language and we are looking to put a stop to it.

Aimed at supporting young match officials, the new initiative will see yellow armbands introduced for all referees under the age of 18 in football to remind everyone that the referee is still subject to the safeguarding legislation – and should therefore be protected, encouraged and treated with respect.

Essentially, the armbands are to remind adults that the match official is still a minor, learning to be the best official they can be. Let’s remember, they are there because they enjoy being involved in football, it’s their game too as well as the players.

Armbands will be sent to all registered referees under the age of 18 within the next seven to ten days and the scheme will begin immediately.

Following discussions between the League and the South Wales FA, the League will undergo its’ biggest changes since formation from the start of the 2023/2024 season. The current set up of three divisions of sixteen Read more…

The shortage of referees in the Area (and throughout football generally) is now very severe. We need to encourage more people into refereeing and to this end, the South Wales FA is announcing a special offer to all those who wish to sign up for a full referees’ course. We will offer you the chance to have your course fees reimbursed over three or six months after you have completed the course and officiated in matches. The courses are available at https://becomearef.wales/ and if you take the £25 or £70 options, you will get fees refunded at three or six months once you have completed the specified number of matches in the terms and conditions. The offer is open immediately and the next final session course in the South Wales FA area is on Sunday 7 November at the USW Grounds in Treforest. TERMS OF OFFER The offer is to give refunds of course fees to anyone who enrols and completes either the full course (no kit or extras) for £25 or the full course with extras for £70. The offer is open to all who register for the course from 11 October 2021 and can be witrdrawn by the Association at any time. Refund levels Basic course (no kit) – full refund (£25) after three months once the candidate has completed six games on COMET (whichever occurs later) Full course – part refund (£35) after three months once the candidate has completed eight games on COMET, remainder refunded once the candidate has completed fifteen games on COMET or at six months, whichever is later. These games must all be completed within twelve months of the candidate completing the practical day. The candidate’s postal address must be within the South Wales FA area and all matches must be within SWFA affiliated competitions. Qualifying games must be competition matches and must be able to be verified on COMET – Sunday leagues and friendlies would not therefore be counted in this

Back in May, we wrote to all clubs and officials with an initial questionnaire about the SWFA and its activities. From that, we have constructed a second, more detailed questionnaire to help the Association frame Read more…

Any cookies that may not be particularly necessary for the website to function and is used specifically to collect user personal data via analytics, ads, other embedded contents are termed as non-necessary cookies. It is mandatory to procure user consent prior to running these cookies on your website.